I am a survivor of domestic violence, many times over. As a child I was not protected from predators. And that set the foundation for attracting multiple predators over the course of my adulthood. I’m not one to dwell on or lament over the past, but I do believe that the more I share my stories and experiences, the greater chance I have of helping others who may still be suffering.

One of the most surprisingly painful forms of emotional abuse I have suffered over the years is victim shaming. I explain victim shaming as when a person, other than the one who emotionally, financially, physically or sexually abused you, speaks to you as though the abuse was your fault: you asked for it, you didn’t stop it, you didn’t leave, or whatever verbiage they use to imply that you are to blame for your abuse.

The reason I find this so painful is because it often happens when you have let your guard down and you are not expecting it.

I’ve had family members turn their backs on me over the years, or intentionally put me in harms way, for that matter. I’ve been told things like, “Well I guess he hasn’t hit you hard enough yet” as someone dismisses my pain, my fear, and just walked away. I have had friends turn their backs on me as well and judge me for going back to a dangerous situation. Sometimes people come around, and sometimes they don’t. One thing I have learned over the years is that not everyone is capable of being supportive of others suffering. I don’t know whether it is from a lack of empathy or coping with their own survival of abuse or something else entirely, but now, thinking back, I find it hard to understand how people have reacted the way they did. You can’t ever really know how or why people behave the way they do. It doesn’t make the behavior ok, but being understanding helps me to forgive others and move on.

One of the most shocking victim shaming experiences of my life occurred in a professional environment. Years ago, I used to exhibit at trade shows for the craft industry. I would teach on the national level and also spend time in vendors’ booths autographing my books and doing demonstration of their products in their booths, such as yarn and tool vendors. And over the course of several years of traveling to these shows, I met many lovely people, some of whom are still my friends!

During one summertime show I was promoting patterns I wrote for the vendor’s yarns and we were cross promoting in their booth. It was early in the day and I was alone in the booth, as  the exhibitors went to get some coffee before things got busy. Just as two potential customers walked into my booth, one of the other vendors at the show (who was also a large sponsor of the show), walked into the booth, placed his hand on my knee and swept his hand up my leg underneath my skirt all the way to my panties. I was mortified that he would touch me so inappropriately. And even more so because of the two potential customers in the booth that might have seen what he did. As quickly as he walked in and groped me, he left. Fortunately the customers didn’t notice what happened. I tried to shake it off and warmly greeted the customers. As I was chatting with them, the man walked by again and loudly called out to me, “there is more where that came from”. The customers were confused and asked me if I knew him or knew what he was talking about. I laughed it off and said I did not know and we continued to talk about the lovely yarn.

A short while later, the couple I was representing in the booth came back and I told them what happened. They suggested I speak to the management of the event so together we went looking for someone. We found the top man in charge of the event and asked to speak with him privately. I explained what happened to me and was told that my story was impossible because the man I was accusing of sexually harassing me in my booth was not only a married man, but he was also gay and one of the largest sponsors of the show. And then I was told he had never done this to anyone before. I replied, “What he did to me was unacceptable and his marital status and sexual identity are irrelevant, as is whether or not he has done something like this before!” I was told I was acting like a victim and overreacting like someone who had been sexually abused before. I was shocked. Whether or not I was ever abused in my life had NOTHING to do with being abused there. The conversation became heated. Dripping with sarcasm and a smirk, he told me if I was so scared I should have called 9-1-1. I was never ‘scared’ of the man who groped me in the booth but I also thought I deserved to work in a safe environment without sexual harassment and sexual humiliation in front of customers.

Speaking with the management of the event was completely unsuccessful. They offered me no protection, refused to even acknowledge that what the man did to me was wrong and blatantly told me I was overreacting because I must have had a violent past. As a token, I was told they would ask him to not come back to my booth for the rest of the show. As we were walking out of the management’s onsite offices, another event staff member pulled me aside and said don’t waste your time reporting sexual abuse with this event company. She said, “I’ve worked with them for years and I’ve been sexually harassed several times!” At this point I was under contract to teach and promote at several more shows with the same event company that year.

It was a very tough show to get through. I put on the bravest face I could muster and I continued to teach, autograph books and promote products for the rest of the weekend. I confided my story to only a couple of designers and colleagues privately and tried to keep the rest to myself and just get through the weekend. As a single mom and entrepreneur I only left home and traveled to shows to make money to support my family. I had to focus on my priorities and do the best I could, despite the circumstances, to make money to bring home.

At the next show a few months later, one of the people I had confided in at the prior show was collaborating and working with the company that sexually harassed me. Between the management of the event not protecting me or even acknowledging that I was treated poorly, and people I confided in working with the abuser behind my back, I felt completely unwelcome at this event and knew I would never renew my contract.

It was a scary decision to make because I depended on this money to support my family.

I fulfilled my commitments to teach and promote at the rest of the shows that year. At one of last events I ever attended, the wife of my abuser approached me drunk at a cocktail party (almost a year later). She repeatedly said ‘whatever her husband may or may not have done to me was an accident and he didn’t mean to do it’. I told her logically, “It cannot possibly be an accident if he came back to tell me there was more where that came from”. She told me I was wrong, of course. She wasn’t there and she had no way of making that statement honestly. Because she was so intoxicated, an intellectual conversation was impossible. The more I tried to speak with her, the louder she repeated the same statement I quoted above. Eventually I had to leave the cocktail party, even though I was there to network and grow my business.

For all the victim shamers out there, I assure you there is nothing you can say to me or any other victim that we haven’t already said to ourselves. And yes, I regret the way I handled this situation. You may ask, why didn’t I punch the man or slap him or yell at him when he groped me in my booth? Good question! First of all, it happened sooo quickly and my guard was down. I didn’t expect that kind of behavior at a craft show, to be honest. Secondly, I was still representing my brand and the brand of the vendor whose booth I was standing in at the time. And thirdly, I did not want to startle or upset the customers who were standing in the booth at the time I was attacked. I truly thought I could be more effective keeping my cool and going to the management of the event and getting things cleared up professionally, with civility and dignity. The fact that I was not only victim shamed but also blamed for the entire situation because I was an experienced sexual abuse survivor? What? I was completely stunned. Maybe I should have called the event manager’s bluff when he told me to call 9-1-1. Then to have colleagues not support me and actually collaborate and work with the man’s company that abused me were further slaps in my face.

I had to chalk it up as another chapter of my life swept under the rug for everyone else to move on and pretend it didn’t happen.

So was it the height of my heels? Was it the length of my dress? Or the color of my lipstick? But wait, did I ask for it? Or was he gay? Or was it an accident? Or did I make it up because I am a sexual abuse survivor? C’mon victim shamers, at least get your stories straight…

Oh believe me, I have been told ‘I asked for it’ many times over my lifetime. You smile too big. You make too much eye contact. You are too nice. You are too this, too that, and you should have blah, blah, blah…

Abuse comes in all shapes and sizes, and unfortunately, it can happen when you least expect it, too. 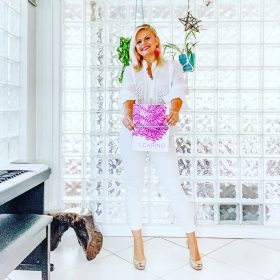 Kristin Omdahl is the best-selling author of dozens of knit and crochet books; publisher of almost 1000 knit and crochet patterns; producer of award-winning videos; and curator of gorgeous yarns and products. You can join Kristin LIVE 5 days a week for The Kristin Omdahl Show on YouTube and browse through thousands of tutorial videos there, too. Kristin donates a portion of every sale to help survivors of domestic violence. Learn more about Kristin’s charity, Project Kristin Cares HERE.

You can browse through close to 1000 previously recorded episodes HERE: The Kristin Omdahl Show Playlist. Make sure to subscribe to my YouTube Channel to get reminders when the next episode airs LIVE.