This gorgeous shawl is knit from the top down, beginning with a burst of flower petals, trails down into a trellis like lace pattern and ends with a scalloped lace edging. Inspired by daydreams of gazing out through the mist and being mesmerized by the textures of the sea. 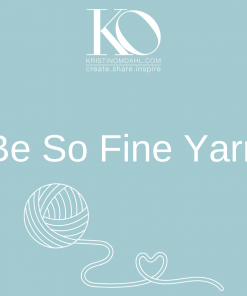 Be So Fine Yarn 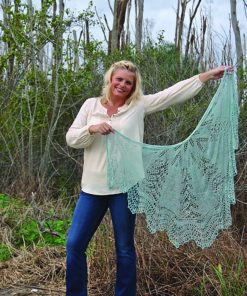 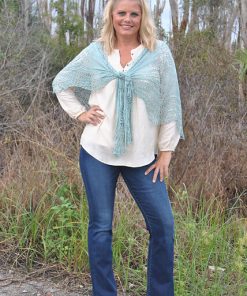 Gauge: Is not critical for this project

Maintain the 5 sts on each side of work in garter stitch for remainder of shawl.

NOTE: repeat for all WS , even numbered rows

Row 104: (and all even numbered rows) knit across

BO very loosely as follows: k1, *yo, k1. Pass first st and yo up and over 2nd st (1 stitch BO). Rep from * to end, with one stitch left on your needles. Fasten off. Weave in loose ends. Hand wash, block to finished measurements and let dry.

I would love to see your creations. Just as much fun as making these myself is the satisfaction I get from seeing my designs come to life and other crochet fans wearing them too. There are now 2 ways you can share what you have done!

Additionally, I host a livestreaming podcast weekday on my YouTube Channel called Create Share Inspire Podcast. You can join the audience and even ask me questions LIVE! I often do a show and tell, or quick demo and I always interact with the live audience. It is a lot of fun!

You can browse through over 800 previously recorded episodes HERE: Create Share Inspire Podcast Playlist . Make sure to subscribe to my YouTube Channel to get reminders when the next episode airs LIVE.